A 40 kg iron was found by Oleg Gus’kov, Moscow resident, as he was returning home from collecting mushrooms near the village of Dronino in the Ryazan district. In early 2003, it was taken to Vernad, and identified as meteoritic. In summer 2003, scientific expeditions and meteorite hunters collected more than 600 fragments (the largest is 250 kg) totaling about 3 000 kg and occurring at a depth of 0.2-2 m across an area of 0.5×1.5 km. The distribution of the fragments suggests that the meteorite formed a now-buried crater about 30 m in diameter. This crater is not reflected in the present-day topography of the site. No historical records exist of a meteorite fall, thus it appears likely that the meteorite fell earlier than the 12th century when the area was largely unpopulated.

Classification and mineralogy : Dronino iron is an ataxite containing sulfide inclusions (~10 vol.%) and consisting of kamacite (7.0±0.5 wt% Ni and 0.75 wt% Co) and rare taenite (26.5±0.5 wt% Ni and 0.35 wt% Co) as elongated precipitates (1-3 μm in size) which form linear and banded textures; sulfide inclusions (up to a few mm in size) rounded and elongated along the banding; accessories are chromite and Fe phosphate (graftonite?); no phosphide was found and P is not detectable in metal with EMP; INAA data: Ni 98.1, Co 5.54 (mg/g), Cr 37, Cu 32, Ga <0.3, As 3.52, W 0.38, Ir 1.68 ppm, Au 0.284 (μg/g); the meteorite is most close to IVA irons in Ni, Ir and the low P but the low Au and Ga contents distinguish the Dronino element pattern from that of all known iron meteorite groups. Dronino meteorite fragments are heavily weathered and covered with rust 1-3 cm thick. Sulfide nodules are surrounded by Fe hydroxides, which replace metal. Troilite of the nodules is commonly replaced with unknown Fe,Ni sulfides. 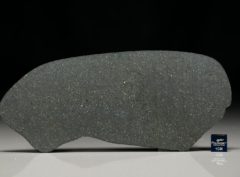 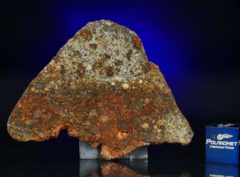 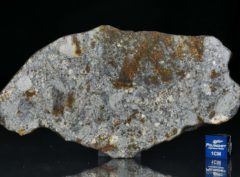 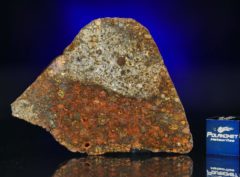 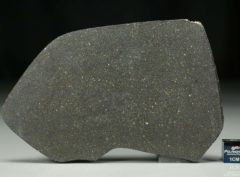 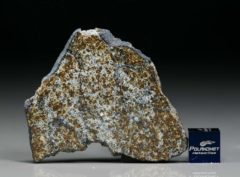 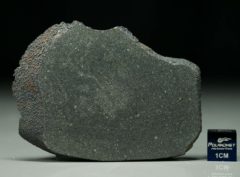 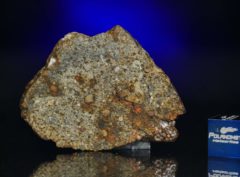 52 $ Add to cart
This website uses cookies to improve your experience. We'll assume you're ok with this, but you can opt-out if you wish.Accept