History: The meteorite was found on 20 April 2014 during a field trip in the Oman desert.

I keep this specimen for around four years on my window thinking it is just funny rock from my Oman trip. I was thinking to throw it away few times. Around 2 years ago I cut off small endpiece to look inside it, but I didnt find anything interesting (read meteorite related). Finally in 2018 I send that endpiece to A. Greshake to be 100% sure that its not meteorite before I throw it through my window. Confirmation that it is meteorite was most surprising information that I received.

Very thin full slice prepared to make thin sections, but I wont do them anymore so here I offer it for collector. Its one side polished, covered with paraloid. 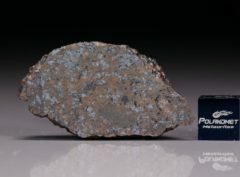 1,250$ Add to cart
This website uses cookies to improve your experience. We'll assume you're ok with this, but you can opt-out if you wish.Accept